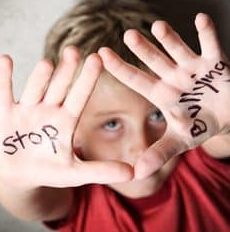 Bullying HAPPENS:
• can happen to ANYONE no matter their age, and
• can occur ANYWHERE people gather including schools, work-place, neighborhoods, faith communities, sporting events and online via texting, gaming, and social media

Bullying IS:
• Unwanted aggressive behavior done willingly, knowingly and deliberately
• Acts inflicted over another person with the intention to hurt, harm, intimidate or humiliate
• Occurs due to a real or perceived physical, social or emotional “imbalance of power”
• Repetitive or potential-to-be-repetitive

Bullying FACTS:
• More than 1 out of 5 students report being bullied*
• Of those who reported being bullied, 33% indicated it occurred at least 1-2 times a month*
• Most common form of bullying is verbal (79%) then social (50%), physical (29%) and cyber (25%)*
• 57% of bullying situations stop when a peer intervenes on behalf of person being bullied*
• A higher percentage of females report being bullied, in all category types except physical
• Middle schools have highest reports of bullying (22%), then high schools (15%), and lastly primary schools (8%), sixth graders experience the most bullying (31%)*
• Bullying is most typically related to physical appearance (30%), race (10%), gender (8%), disability (7%), ethnicity (7%), religion (5%) and sexual orientation (4%)***

Signs/Symptoms of Being Bullied****:
• has torn, damaged or missing clothing, books or belongings;
• has unexplained cuts, bruises, and scratches;
• has few, if any, friends, sudden loss of friends or avoidance of social situations;
• seems afraid to be in school, leave school, ride the bus, or take part in organized activities with peers;
• has lost interest in school work or suddenly begins to perform poorly;
• appears sad, moody, teary, or depressed;
• self-destructive behaviors such as running away, harming themselves, or talking about suicide;
• difficulty sleeping or frequent nightmares;
• complains frequently of headaches, stomach aches, or other physical ailments, faking illness;
• avoids the cafeteria and/or doesn’t eat.

Who is at Risk****:
• Are perceived as different from their peers (physically, socially and/or economically)
• Are perceived as weak or unable to defend themselves
• Are depressed, anxious, or have low self-esteem
• Are less popular than others and have few friends
• Do not get along well with others, seen as annoying or provoking, or antagonize others for attention

Bystander:
A bystander has a significant responsibility to stop harmful behaviors they witness in person or online and their actions can make a critical difference. Intervene immediately, it’s okay to get help
• Separate those involved
• Ensure everyone is safe
• Meet any immediate medical or mental health needs
• Stay Calm – reassure everyone involved including other bystanders
• Model respectful behaviors when you intervene

More than half the time, bullying stops within 10 seconds of a bystander stepping in to help.
• DON’T ignore it
• DON’T assume “they can work it out without any help”
• DON’T immediately try to sort out the facts
• DON’T force others to say what they publicly saw (observed?)
• DON’T question those involved around others
• DON’T talk to people together, only separately
• DON’T encourage/make the individual to apologize or patch up the relationship in the moment.

Counseling and Recovery Services is available for mental health/substance abuse services for any age regardless of their ability to pay. Call 918.492.2554 for more information.